Sean Slootweg has a connection to the club that goes back through the years, but also continues today, as his father is a current member. His sister and two brothers have also been members. Sean was diagnosed with epilepsy in 2004 at the age of 18, just before leaving for university in Swansea. Although that put an end to his aspirations to join the RAF, he dreamt of designing aircraft which future RAF pilots would fly, and that became the driving force behind his decision to study aerospace engineering. 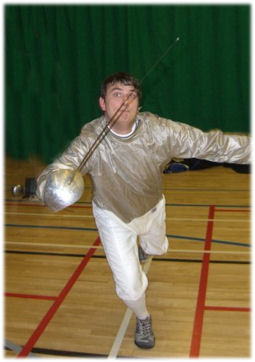 His epilepsy medication had some weight gain associated with it, so Sean took up fencing as a way to keep fit. He embraced all 3 weapons, but eventually decided to concentrate on Sabre, particularly as a member of the university men's team. He was the men's team captain (and club armourer) and also an enthusiastic coach of freshers new to the sport. In March 2008, Sean passed away unexpectedly, but his family was supported by the knowledge that he was highly respected and well-loved by his many friends and family. Subsequently, the club decided to establish the Sean Slootweg Memorial Sabre Competition to be held from 2009.

The family's first source of information and support for epilepsy came from the charity Epilepsy Action, so the proceeds of the competition will go to that charity.

depending on entries this will be a Poule and De event